Know the Signs of Juvenile Arthritis 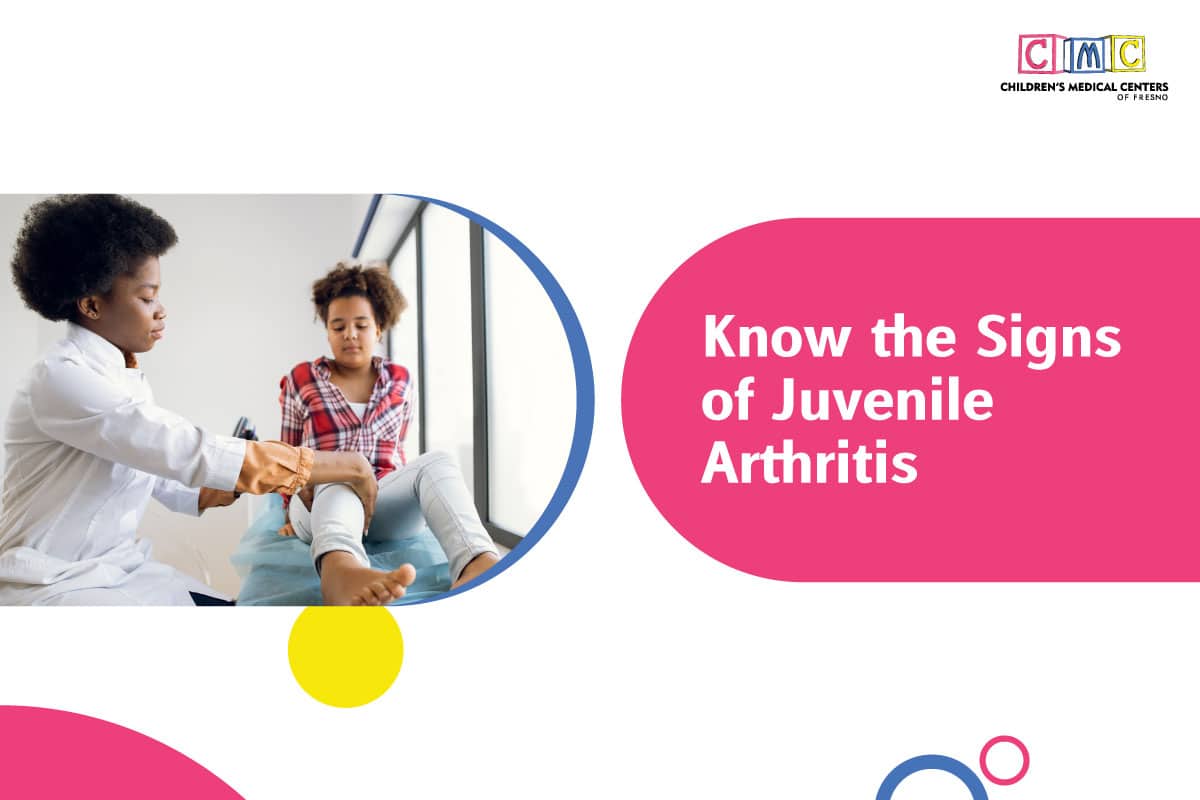 Arthritis may seem like a condition that only affects older adults, but the truth is, it can also affect teenagers and children. As we observe Juvenile Awareness Month this July, let’s shine a light on child arthritis and what to do if you observe symptoms. Read this article to learn more.

Overview of Arthritis in Children

Juvenile arthritis, formerly known as juvenile rheumatoid arthritis (JRA) is now referred to as juvenile idiopathic arthritis (JIA), consists of a set of conditions that causes inflammation in your child’s joints. The joint is where two bones meet to allow movement of the body. When these joints have inflammation, it can cause pain, swelling, and stiffness, ranging from mild to severe. This condition limits their ability to move freely, such as jumping, running, and participating in sports.

JIA can occur at any time during childhood but is most commonly seen in young people under the age of 16. It affects nearly 300,000 children under 18 in the US alone. Despite its name, juvenile arthritis doesn’t mean your child will outgrow it. While some types of juvenile arthritis improve over time without symptoms, others don’t show signs of improvement and can become chronic childhood arthritis until adulthood.

There are various types of juvenile arthritis, which can be categorized as follows:

Also called oligoarticular arthritis. The name oligo means few/small, so fewer than five joints characterize this type. It often affects the knee or ankle joints first. Half of all cases of juvenile arthritis are oligoarticular and are more likely to occur in girls under the age of eight. Additionally, oligoarticular juvenile arthritis can aggravate eye inflammation. Regular eye exams by an ophthalmologist are essential for preventing visual impairment in your child.

The name poly means many (polyarthritis), so this type is characterized by many joints being affected at once.Polyarthritis typically involves more than five joints at once; it often involves large joints such as those in the knees or hips first but can affect smaller joints like those found in hands and feet.

Children and teens with rheumatoid factor IgM in their blood, or IgM antibodies, are more likely to develop a severe case of the condition. This type of arthritis is similar to adult rheumatoid arthritis and often requires more intensive treatment.

This form of arthritis occurs when children have psoriasis, an autoimmune disease that causes red, scaly patches on many body parts. The presence of psoriasis doesn’t mean they’ll get psoriatic arthritis, but if they do have psoriasis, it may increase their risk of developing this type of arthritis later in life.

Those with this condition may suffer from dactylitis inflammation of their fingers or toes. Occasionally, just a few joints are affected. Other times, several joints, both large and small, might be affected. The symptoms of psoriatic arthritis may occur before or at the same time as the skin condition.

Approximately 10-20% of children suffer from systemic JIA, a less common yet more severe form of juvenile idiopathic arthritis. SJIA can cause pain, swelling, and stiffness in one or more joints. Children who suffer from it can have swollen lymph nodes and problems with their organs, particularly their spleens, lungs, hearts, and liver. An individual is at risk for this diagnosis if a fever of at least 102° is persistent for at least 2 weeks and the presence of skin rashes.

In this type of juvenile arthritis, the child also has enthesitis. This condition occurs when inflammation occurs at sites where tendons or ligaments attach directly to the bone. These sites are called entheses. The most common entheses affected by this type of juvenile arthritis are the Achilles tendon behind the ankle and the tendon below the knee cap. But it can also affect the hips and spine.

Most juvenile arthritis occurs without an apparent cause, so it’s called idiopathic, meaning of ‘unknown origin.’ Even though juvenile arthritis causes aren’t always known, a number of them are associated with an overactive immune system (autoimmune disorder). In other words, your immune system targets healthy tissue by mistake — like when someone has an allergy or hay fever — instead of attacking germs or infections as it should do. Others may be related to a person’s genes (DNA) or environmental factors. Sometimes, it is triggered by an infection or other illness like strep throat.

Signs and Symptoms of Arthritis in Children

The symptoms of juvenile idiopathic arthritis vary depending on the type of JIA. Some types cause similar symptoms, while others are more specific for one kind of symptom. All types of JIA cause pain, stiffness, and swelling in certain joints. Other conditions can cause some symptoms, so it is essential to talk to your doctor if you notice any of these juvenile arthritis symptoms:

How Is Juvenile Arthritis Diagnosed?

While adult rheumatoid arthritis is a chronic condition, children with juvenile idiopathic arthritis often overcome it with proper treatment. Nevertheless, the condition can prevent a child’s bones from growing correctly. Juvenile arthritis is something that requires immediate attention, as it can affect all aspects of your child’s development as well. Early treatment can better reverse damage caused by disease and reduce symptoms.

Start with a consultation with a pediatrician. It will include discussing your child’s medical history and a physical exam. The doctor will examine your child’s joints for swelling, tenderness, and stiffness and look for deformities in the joints. If your child has signs of juvenile arthritis, they may need to refer you to a specialist who will conduct more tests to confirm the diagnosis.

The tests used to diagnose juvenile arthritis include:

These tests check for signs that the body is fighting an infection or has antibodies related to autoimmune diseases like lupus. Blood tests show levels of certain substances in the blood that may indicate a problem with the immune system or elsewhere in the body. It’s also possible to test blood samples for specific types of antibodies that might be associated with juvenile arthritis. The results of a blood test can also assist in ruling out other conditions that mimic these conditions.

X-rays help doctors look for changes in bones or joints, such as bowing or deformation caused by inflammation in the joint lining. It can show whether there is any joint damage or bone loss, particularly in the hips or knees.

This test creates pictures of bones, soft tissue, and organs so they can be examined more closely than with x-rays alone. An MRI produces detailed images of internal structures such as soft tissue around joints, using strong magnetic fields and radio waves to determine whether inflammation is present.

There’s no cure for JIA, but treatments can help relieve symptoms, prevent joint damage, and prevent it from becoming active again. There are several objectives of treatment, including

Treatment depends on the type of juvenile arthritis your child has, how it affects their joints, and how severe their symptoms are. These may include:

Nonsteroidal anti-inflammatory drugs (NSAIDs), like naproxen sodium, ibuprofen, or over-the-counter pain relievers such as acetaminophen, can help relieve pain and stiffness. Your doctor may also prescribe stronger medications to help manage their symptoms.

Physical therapy helps to strengthen muscles around affected joints to increase motion and relieve stiffness. It may also improve joint stability by improving balance, coordination, and muscle strength, which are important for preventing falls.

Invasive procedures are usually unnecessary in children with mild juvenile arthritis that affects only a few joints or has only recently begun affecting multiple joints in the body. In some cases, doctors may require your child to undergo surgery to repair damaged joints or bones. Surgery might also be considered if they have chronic or persistent symptoms that interfere with regular activity or develop deformities.

Leaving juvenile arthritis untreated can negatively impact your child’s life. When you notice any signs of arthritis, take action right away. Don’t hesitate to contact Children’s Medical Centers of Fresno for a consultation. Call (559) 455-1500 or make an appointment online.

Arthritis Foundation (Kids Get Arthritis, Too)

What Causes Cleft Lip & Palate
Headaches in Children: When Should Parents Worry

Select location to chat with us